Fortnite is the most popular game of 2018-2019 (and I would argue one of the best designed games ever). “Skins” in Fortnite are costumes for your character, letting you dress up as an astronaut, bigfoot, or a fish controlling a robot body. The release of each new skin is met with discussion online; recently, a black female skin “Luxe” was released, and people seemed unusually critical of the skin. Since I had all of the code from my NBA and NFL analyses*, I figured I would investigate to see how skin race and gender influences sentiment on Fortnite reddit. In terms of results, the two headlines are:
* Don’t let “I already have the code” fool you on a data science project. Most of the work was in collecting the data and cleaning it.

For details of my methods, see this blog post. In brief, I scraped Fortnite reddit for comments from January 2018 through July 2019, with the help of pushshift.io. I then performed named entity recognition* to identify which posts were about Fornite skins. To quantify which skins were most liked, I used VADER with a lexicon modified for Fortnite. For covariates, I scraped two Fortnite skins websites, Gamepedia and Progameguides. All notebooks used for the project can be found on github.

* For NER this time, I tried fine-tuning spaCy’s NER model. I labeled entities for ~300 comments. I found that for skins that had 5+ labels, the NER worked fairly well (decent recall on spot-checked posts). However, for skins that had <= 3 labels, the recall was abysmal. Rather than hand labeling 1,500 comments (5 for each skin), I decided to go back to simple regex extraction for skin names

Analysis of which skins get discussed the most

Before diving into which skins had the highest sentiment, I first wanted to see which skins were discussed the most. Here are the five most commented skins:

To understand why these skins are popular, it helps to know a bit about how Fortnite is played. Every 3-4 months, the developers release a “Season,” which includes a “Battle Pass.” The Battle Pass costs around $10, and includes access to a large number of skins that get unlocked as you play. Three of the above skins are from the Battle Pass (Omega, Drift, and Black Knight). John Wick is a skin from cross-promotional advertisement from John Wick 3; and "John Wick" was also the nickname for a Battle Pass skin, The Reaper. Finally, Skull Trooper is an old skin from October 2017 that was the signature skin of a Fortnite streamer, Myth.

The distribution of number of skin comments followed an exponential distribution. Here is the number of comments per skin, in rank order (note the log-scale of the y-axis: 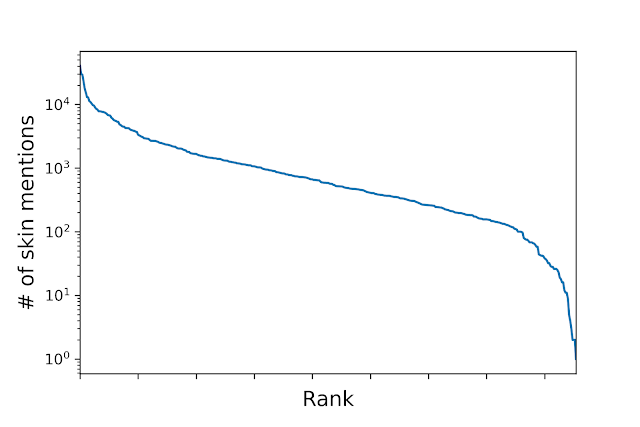 Analysis of what drives skin sentiment

All of these skins are less popular skins, which highlights one of the biases of this analysis: people who discuss skins may have stronger opinions; and this bias may be biggest for the least discussed skins. Of these skins, only Hypernova is male, which may indicate that female skins have wider variance (both more liked and disliked).

To investigate that hypothesis, we can plot the distribution of sentiment towards both male and female skins. The overall mean sentiment skins was 0.084, with STD of 0.58: 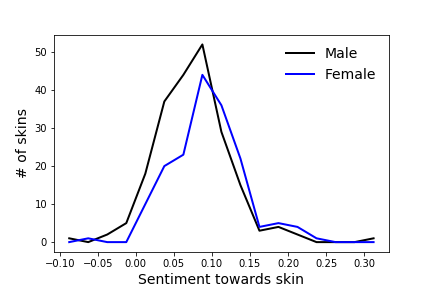 While there are both well liked male and female skins, there is a large swath of male skins with neutral opinion (0-0.1).

In the first part of this analysis, I found that skins featured in the Battle Pass were discussed more often. This makes intuitive sense, as these skins are featured on splash screens and marketing for Fortnite. Many of these skins also have unlockable content, which people discuss how to unlock.

In terms of sentiment, I found that male skins had lower sentiment than female skins. One possible explanation for this is that Fortnite reddit skews towards young men, who might simply be more attracted to female skins. Popular streamers like Daequan often objectify female characters, making comments like, “Gimme that booty!” Another potential explanation is that female skins may have more diverse aesthetics, which allows people who prefer those aesthetics to attach to those skins. For example, many male skins share standard military profiles, and are relatively indistinguishable. In contrast, female skins can express a wider range of emotions, and may have more variety in clothes (skirts, tops, etc.). Some tangential evidence for this may be the large number of male skins with neutral sentiment.

As a final note to myself, if I want to revisit this type of analysis in the future, I need to improve the sentiment analysis. While I believe the assumptions of my current model – that sentence level sentiment reflects skin sentiment – is broadly true, in checking my data a large minority of samples have inaccurate sentiment. While performing more sophisticated sentiment analysis may take more time, it should give me a better estimate of entity sentiment, and frankly feel less hacky.
Posted by Mike at 3:07 PM