One of the grad students in the lab has started a project on thermoregulation, and he measures mouse tail temperature using an infrared camera from FLIR. FLIR has an analysis tool for its cameras which works OK, but is not really designed for analyzing hundreds of images. To save him some time, I made a simple GUI for analyzing thermal images. In this post I'm going to outline the design of the gui, and how to use it, in case anyone else needs to analyze lots of thermal images.

The FLIR camera stores images in pseudocolor jpegs that look like this: 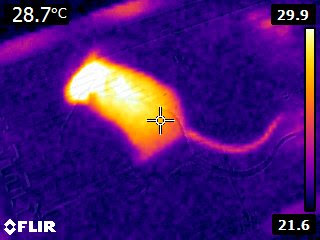 However, these jpegs do not contain the actual temperature data. To figure out where the temperature data was, I consulted this thread from two years ago about FLIR images. I learned that the data is actually contained in the EXIF for the jpeg, is only 80x60 pixels (compared to the jpeg's 320x240), contains intensity data (not temperature), and that the data was stored with the wrong -endian. Luckily, the thread contained enough details that I was able to figure out how to extract the image from the EXIF using exiftool, and was able to switch the endian using ImageMagick.

Once I had the imaging data, I then needed to convert it to temperature. Here the thread came in handy again, specifically this post which outlined how to convert radiance to temperature. All of the constants for the equation are also stored in the EXIF of the jpeg, which allowed me to calculate the temperature for each point.

Once I was able to calculate true-temperature images, it was time to make the GUI! Previously I've made GUIs using QT Designer, but I found an outline of a tkinter script that records the x,y coordinates whenever someone clicks on an image, so I decided to modify that instead. For the image to click on, I decided to go with a grayscale version of the pseudocolor jpeg, as it looks a lot nicer.

To use the GUI, you need to install python 3.4, exiftool and ImageMagick. Then to run the gui, open a command prompt, and go to the directory with the images, then execute:

If this GUI sounds interesting to you, you can download the script. That folder contains: 1) a README.txt explaining how to install everything, and intructions on how to run the GUI; and 2) the script for the GUI, mouse_tail_gui.py. Everything was written in python 3. If you are using the script on Windows you may have to install packages for tkinter and image. If you have any problems, please contact me, as I helped someone else in the lab set it up.
Posted by Mike at 3:03 PM